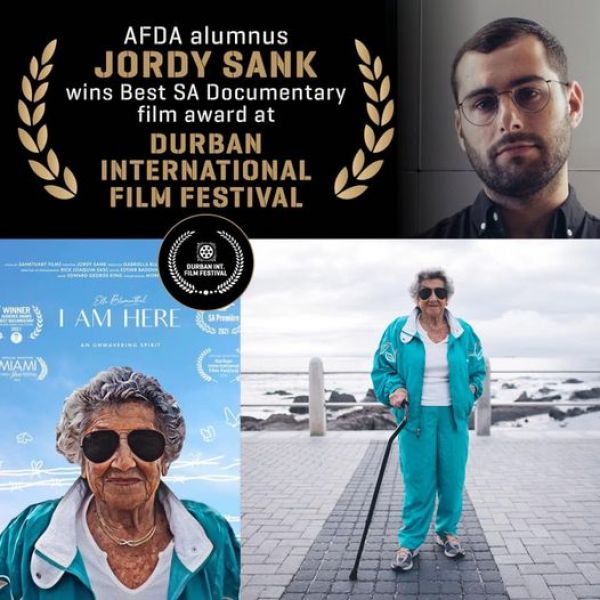 It is with great excitement that we give this honourable shout out to the documentary film, I Am Here, directed by AFDA alumnus Jordy Sank. The film won the Best South African Documentary at the 42nd Durban International Film Festival. The documentary about South Africa’s oldest Holocaust survivor Ella Blumenthal was also the most watched production at DIFF 2021 which automatically qualifies the film for Oscar award consideration.
Fellow AFDA alumni involved in the making of the film are Esther Badenhorst – Editor, Edward George King – Composer and Jarryd Duthoit – Colour Grade.
“The winning of this Jury Award is a testament to Ella’s extraordinary strength and boundless love that has truly resonated and touched so many. We thank this year’s prestigious jury and DIFF for this phenomenal birthday present celebrating Ella and her remarkable story,” says Jordy.
Ella Blumenthal said, “I have always asked ‘Why was I chosen to survive?’ Now, I have one possible explanation. In this way, I hope to play a small part in curbing the all pervasive hatred so prevalent in the world today and spreading a message of love and understanding. I am so proud and grateful to the Jury of the DIFF for choosing this film for the best South African documentary award.”
Film critic David R. Walker reviewed the film, “This is an amazing documentary, skillfully educating a new generation about the survivors of the Holocaust and a formidable woman who has learnt to live life through memories as most of her family from Poland were killed during World War II.”
This is the second award for I Am Here, which won the Audience Award for Best Documentary at the Atlanta Jewish Film Festival earlier this year.
The film is making headway internationally as Metro International acquired worldwide rights to I Am Here, and launched it at the European Film Market in Berlin in February 2021.