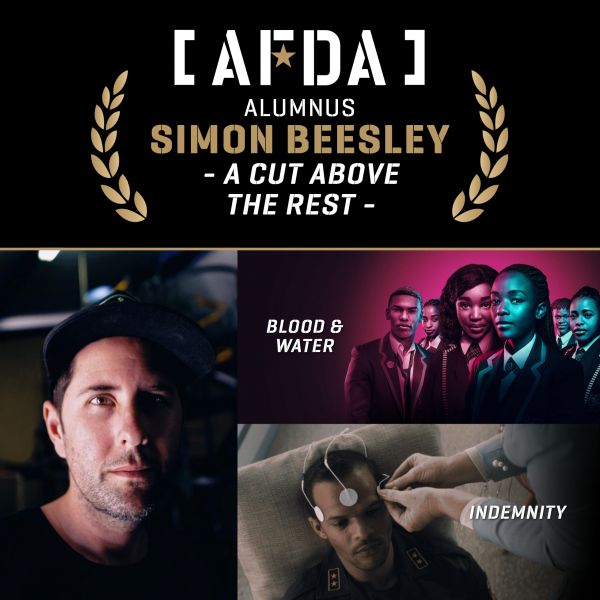 AFDA ALUMNUS SIMON BEESLEY – A CUT ABOVE THE REST

AFDA Cape Town alumnus Simon Beesley is the Co-Founder of Gambit Films, Chief Editor, Post-Production Superviser and an all-round Tech Guru. His most recent editing work was on the South African feature film, ‘Indemnity’, directed by fellow alumni Travis Taute. The film made its World Premiere at the 25th Fantasia Film Festival in Montreal on the 11 August 2021.

Simon edited the sensational thriller ‘Nommer 37’, directed Nosipho Dumisa for which he won a Golden Horn award for Best Editing at the SAFTAs 2019.

He also edited the multi-award winning film, ‘Noem My Skollie”. The film was selected as the South African candidate film for the Oscars and earned Simon a SAFTA nomination for Best Editor.

“Editing to me is about the ability to shape a moment while influencing audience emotion. I feel a sense of artistic license in being able to make an audience member feel what I want them to feel. Their reaction to a scene could be deeply personal to them, but to the filmmaker, that was part of the plan. There is a moment when it all comes together, with sound, music and grade, that even though you’ve seen the footage a 1000 times before, you can still sit back and go… wow. That’s what it’s is all about.” says Simon.

His other editing credits include the short film ‘Nommer 37’, The A-List (SABC3), Wild Animal Orphans (Animal Planet), All Access (Mzanzi Magic) and the follow up to the critically acclaimed documentary series Shoreline (SABC).

As head of everything post-production at Gambit, Simon’s duties extend beyond his creative and mastered skills as an exceptional narrative editor. His integral job entails ensuring that Gambit stays ahead of current market trends in order for Gambit’s signature style of progressive filmmaking to be achieved. With technology playing more of an important role than ever, creativity needs to be matched with technical savy – a feat Simon accomplishes almost daily.

Simon has a true passion for the visual arts, and is always looking for new and innovative ways to push the boundaries of filmmaking. He is also a budding photographer and has an exceptional ability to blend into any working team within any working environment. His impressive talents leave little doubt that his work will be recognized as anything but extraordinary.