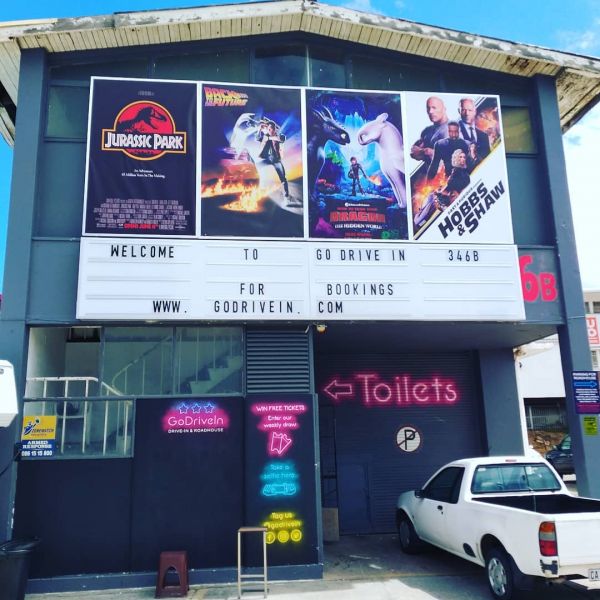 AFDA ALUMNI BRING BACK THE DRIVE-IN THEATRE WITH A DIFFERENCE

At the beginning of the lockdown AFDA alumni Grant De Sousa and Tyrone Rubin brought the global #Masks4All movement to South Africa and started #AfricaMasks4All, a non-profit organisation dedicated to providing 1 million face masks to less fortunate communities. They tried a number of initiatives to raise money for the organisation including Africa’s largest online streaming concert with a host of South Africa’s top musicians before coming up with GoDriveIn in Woodstock, Cape Town, a new entertainment venue inspired by retro drive-ins. What makes GoDriveIn unique is that is not just a drive-in, but also has a variety of offerings such as live concerts, standup comedy and a food truck roadhouse.

Since being launched, GoDriveIn has proved to be a great success, screening international films such as Back to the Future and Jurassic Park, as well as proudly South African films. The screening of Racheltjie de Beer, written by AFDA alumnus Brett Michael Innes was sold out and so is tonight’s screening of Five Fingers for Marseille, starring AFDA alumnus Vuyo Dabula.

“The drive-in roadhouse is essentially phase one of our vision for GoDriveIn. We are planning a Saturday market, VR arcade and a gallery in the space.” says Grant. “In the end my dream of one day being a director with his own cinema has come true.”

Grant is an award winning director and writer. As a commercials director he has received acclaim at Cannes, Ciclope, Shots, New York festivals and the Loeries, including the CFP-E young director award in 2007, best international director at the annual Shark Awards in Kinsale 2017 and the best director over 90 seconds at the Ciclope Africa awards in 2019. His Chicken Licken “Big John” television commercial recently swooped up 4 gold awards including best online film over 30 seconds at the 2019 Loerie awards. According to the 2019 Loerie rankings Grant is ranked third in South Africa.

His short film “It’s Complicated” won best comedy at L.A.Shorts, 3 Kinsale Sharks awards and the audience award at Shnit. He is represented for feature films by Picturescope and Bird Film and commercials by THEY shoot films. Grant also recently signed with Great Guns foe international representation in the USA, UK, India and the Middle East

Tyrone is the founder CEO of SenseVirtual, which is leading Africa forward with its mind-blowing Virtual Reality experiences and solutions. He graduated from AFDA Johannesburg, with a BA in Motion Picture Medium. SenseVirtual has created Virtual Reality solutions and experiences for the Advertising, Property and Education industries. They have worked with some major brands, including Adidas, Google, ELLE, ABSA, and the Foschini Group. SenseVirtual’ s mission is to keep pushing the boundaries of where Virtual Reality can go.

Tyrone heads up South Africa’s Virtual Reality community, Virtual Reality SA (VRSA), which brings Virtual Reality developers together regularly. He has also been involved in bringing media and online startups to market. He founded Stribal an online marketplace to connect South African artists with an international audience. Tyrone currently also manages JointCreatives which does creative research and presentation work for most of the local production companies as well as some of the world’s top international production companies. With his love of film, he co-founded Picturescope to be a platform for independent filmmakers to get their films produced.