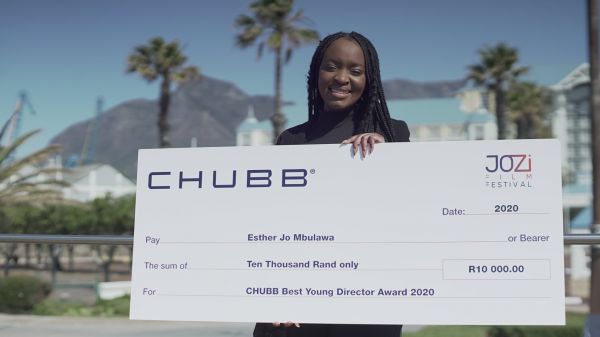 The AFDA Cape Town 2019 honours graduation film, “You, Me And Everything In Between”, directed by Esther Jo Mbulawa,  picked up the Best Student Film Award as well as the prestigious CHUBB Best Young Director Award (R10k Prize) at the 9th annual Jozi Film Festival.

“I am so grateful to The Jozi Film Festival and CHUBB for awarding us with two amazing awards. We were a very small yet persevering crew and so to see us come this far is truly wonderful and I am filled with deep gratitude. Thank you to the ferociously brilliant crew and undeniably talented cast for making this film what it is. And thank you to AFDA for the support you provided throughout the entire process of making this film. We are so happy about this achievement. Thank you Jozi Film Festival and thank you CHUBB.” says director Esther Jo Mbulawa.

“This is fantastic Jo. I want to congratulate you and your team for creating such an important and relevant piece using South Africa’s history. You have reminded us that we must learn from our past to create a better present and it’s a joy to know we have voices like yours in our future. Congratulations to everyone involved for their hard work, talent, determination and courage.” says AFDA Cape Town Head of Postgraduate Studies, Dr Lucia Saks.

“You, Me And Everything In Between” was nominated as a candidate for the Student Academy Awards 2020 as well as the CILECT PRIZE 2020.

The festival aims at providing a platform for both established and emerging South African filmmakers, while also showcasing international films that speak to a diverse audience.

Over the years, the festival has attracted broad critical acclaim, both locally and internationally.