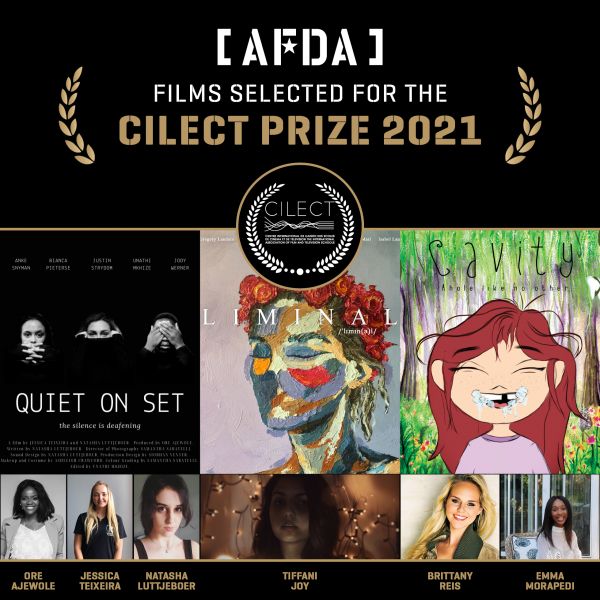 AFDA is proud to announce the selection of three 2020 graduation films to compete for the prestigious CILECT Prize 2020; the first-ever award bestowed to a student film based on the review from the whole community of CILECT Full Member Schools. This community includes 180 institutions from 65 countries, of which AFDA is a member.

The CILECT Prize was founded at the proposal of the (then) Vice-President Conferences and Festivals Prof. Dr Stanislav Semerdjiev in 2005. This prize was established as a result of his long-term research on world student festival activities and once a thorough survey had been conducted amongst all CILECT Full Member Schools on the eventual importance of such a competition. Presently, each CILECT Member School is permitted to submit one film in each category; fiction, documentary and animation.

AFDA’s Johannesburg postgraduate film Quiet on Set, produced by Ore Ajewole and codirected by Natasha Luttjeboer and Jessica Teixeira, represents AFDA in the fiction category. Quiet on set tackles issues concerning abuse of power and sexual harassment, specifically in the film industry. In this drama, a young female sound designer is faced with the dilemma of choosing between her career aspirations and her morals after witnessing the director harassing the female lead. The dichotomy of such a conflict is portrayed through a behind-the-scenes look into how set politics and power dynamics can play out in a male-dominated field where such power has often been used unjustly.

Stephen ‘Spling’ Aspeling, movie critique, states that, “Quiet on Set understands the nuances of the issue and immerses its audience in the grey area, using language and solid performances to translate the slow-creeping tragedy of it all to screen. Silky cinematography, a sharp concept and an important message power this short film, which should serve as obligatory viewing for first-time actors.”

When informed about the CILECT Prize film submission of Quiet on Set, Jessica Teixeira expressed how honoured she was and that, “this project was incredibly personal for our crew. Being a majority female crew and speaking out against an injustice that many women face every day, gave us the chance for our vulnerability to become our courage.”

AFDA’s Durban postgraduate film Liminal, produced and directed by Tiffani Joy, represents AFDA in the documentary category. Liminal explores the concepts of race and racial categorisation in South Africa from the perspectives of mixed race individuals, whom have been encompassed to be categorised as coloured, living in a hyper-racialised country. Conversations around identity and feelings around comfort or discomfort with this classification then unfolds. The dialogue amongst interviewees is occasionally complemented by an artistic visual representation of diverging skin colours, creating poetic imagery that compliments the earnest discussion.

Spling states that, “the modern slant focusses predominantly on 20-somethings who are trying to find their place in a country still largely ruled along racial lines. It’s a fascinating discussion, compelling by way of its beautiful people and eloquent in terms of mining the subject.”

Tiffani joy expressed how proud she was for having Liminal selected for the CILECT Prize, before going on to say that, “I think that now more than ever it’s so important to amplify the voices and lived experiences of people of colour and bring that to the forefront of the conversations which we have fought so hard to be part of.” Films and documentaries like Liminal spark these important conversations that are imperative to the social progression of South Africa.

AFDA’s Johannesburg undergraduate film Cavity, produced by Emma Morapedi and directed and animated by Brittany Reis, represents AFDA in the animation category. Cavity is a dark fantasy animation filled with whimsical imagery created by use of hand-painted backdrops and digital animation. Brooklyn, the child protagonist in Cavity, is transported to a fanciful land after her tooth is lost down the sink drain upon meeting a mystical fairy. Once transported, Brooklyn encounters a manipulative witch with devious intentions and has to try and find a way to escape.

Spling describes the fluidity Cavity possesses that brings the sketch book characters to life; ”using water colour and hand painted backdrops, every Cavity visual is original, spinning a tale speaking to the power of imagination. While limited by its budget, the animated short holds together with a consistent feel. A home grown screenplay is invigorated by amateur voice actors who capture the tone of this bedtime story with verve.”

The director and animator of such an inspired animation, Brittany Reis, expressed her appreciation, “that [their] film Cavity has been selected to represent AFDA at the CILECT prize this year, I’m so grateful and honoured.”

Congratulations to all cast and crew members!