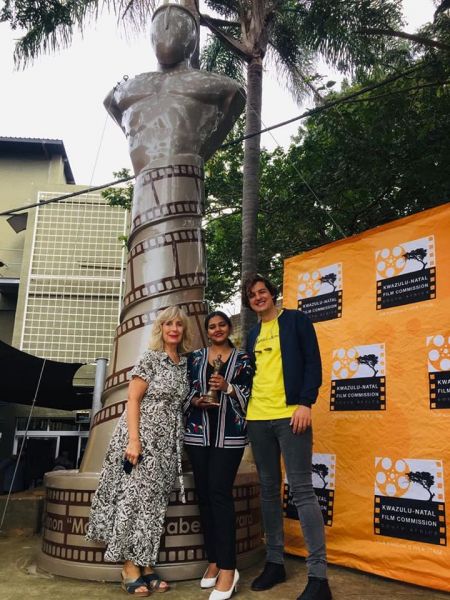 On the 16th April, the Simon Sabela Awards Statue was officially unveiled by members of the KZN Film Commission, AFDA Durban, members of KZN Tourism and the Mayor’s office in a special ribbon-cutting ceremony on the AFDA Durban campus.

The Simon “Mabhunu” Sabela Film and Television Awards recognise outstanding achievement and excellence within the South African film and television industry, with a special focus on KwaZulu-Natal. Among those honoured are actors, producers, directors and various film and television technicians. The awards are an initiative of the Department of Economic Development Tourism and Environmental Affairs and are implemented by the KwaZulu-Natal Film Commission. Mr Simon “Mabhunu” Sabela, in whose honour the film and television awards are named, was a legend in both big screen and television. Not only was he South Africa’s first black film director, he also had a long and successful career which saw him feature in over 34 movies, both nationally and internationally.

AFDA student films have an extraordinary record at the Simon Sabela Awards, having won the Best Student Film award for the last seven years in a row. Furthermore AFDA students and films have received countless nominations and awards in the professional film and television categories. In 2020 Megan Van Der Merwe took the Best Short Screenplay Award for the honours film Thulile against films written by seasoned professionals and in 2019 Sibongiseni Shezi won the Best Actress in a Feature Film award for her stand out performance in the AFDA Durban 2018 experimental short film “Run”.

“The first ever Simon Sabela Award ceremony took place in July of 2013,” says the Dean of AFDA Durban, Dr Janet van Eeden, of the awards. “It was a very special moment for us to attend the awards at the prestigious Inkosi Albert Luthuli International Convention Centre, as we had opened our doors to our first students in 2013. Not only was it AFDA’s first year in Durban, but our own then Head of Film School, Richard Green, received the Simon Sabela Award for Lifetime Achievement. To top that, our students have walked away with the beautiful statuette every single year. That is why, when I was asked if we would house the huge embodiment of the award, the statue of Simon Sabela on our campus, I leapt at the chance. I thought it would be wonderful to have this amazing KZN actor honoured on our campus, and to dub AFDA Durban, the home of the Simon Sabela Awards.”