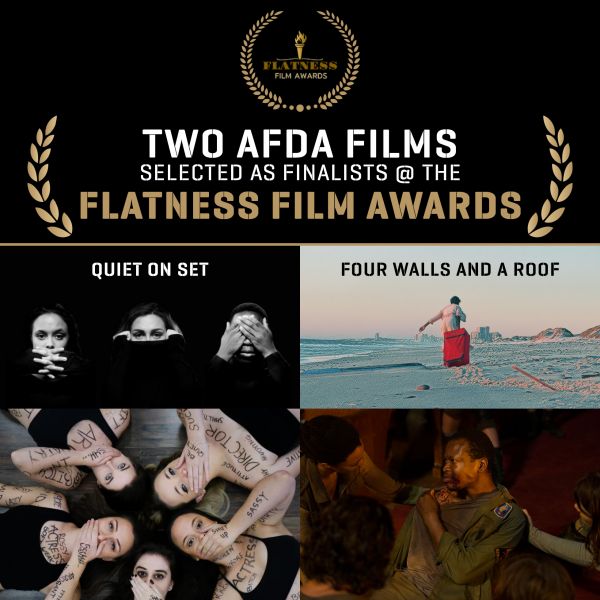 The films will be in competition from the 20 June 2021 with 14 other films from countries all over the world including the United States, India, Brazil, France and Hong Kong.

The Flatness Film Awards is an international independent film festival, committed to sharing great stories from both new and established international and domestic filmmakers from the world of independent cinema.

Thousands of films are made every year, but very few of these films meet with the audience and are rewarded. One of the features that makes Flatness festival different is that it will bring your film to audiences from many countries.

Flatness select and award films every season and provide further marketing, distribution and online screening platforms for the award winners through their partners in media. The aim is to draw wider attention to valuable filmmakers, and to provide an independent platform for appreciative and informed discussion of their work with a unique vision.

Flatness is screening films from around the world and honouring emerging filmmakers from every languages, genders, religious, ethnic and cultural perspective. There are no restrictions of any kind, except for duration.

Winners will be chosen by an international jury and receive Winning-Category Laurels and Certificates.

AFDA Durban staff, students and alumni once again have a strong presence at the annual Simon Mabhunu Sabela film and television awards receiving 16 nominations in 12 different categories, with 8 in the acting categories and 6 for the horror feature film “Tokoloshe:...

END_OF_DOCUMENT_TOKEN_TO_BE_REPLACED

The Fleur du Cap awards which are in their 56th year, will this year, focus exclusively on the Most Promising Student category and AFDA Cape Town are pleased as punch to have 3 live performance students, Chad Langenhoven, Nikho Tsotsi and Thulani Nzonzo short listed...

END_OF_DOCUMENT_TOKEN_TO_BE_REPLACED

AFDA is proud to announce the launch of the AFDA Book, an online publication created by AFDA co-founder Garth Holmes and published by Art Africa Publishing. The publication takes us from where it all began in 1994, with 6 students armed with a broken TV and a rented...

END_OF_DOCUMENT_TOKEN_TO_BE_REPLACED

AFDA Johannesburg 2020 honours graduation film, “The Extraordinary Super-Now” has been nominated as a finalists in 7 categories at the Loerie Awards 2021, the most prestigious creative festival across Africa and the Middle East (AME). The finalists include: - Student...

END_OF_DOCUMENT_TOKEN_TO_BE_REPLACED

AFDA Cape Town is delighted to have Live Performance alumna Nancy Sekhokoane as the Open Day Guest Speaker on the 2 October. Nancy is a loving, passionate and trained performer, actor and voice over artist, among many other incredible things! She completed her...

END_OF_DOCUMENT_TOKEN_TO_BE_REPLACED

AFDA Johannesburg is delighted to have Motion Picture Medium Melissa Nayimuli as their Open Day Guest Speaker on the 2 October. Melissa is a creative who is passionate about storytelling, producing and the arts on a whole. Since graduating she has worked in the...

END_OF_DOCUMENT_TOKEN_TO_BE_REPLACED

AFDA Durban is delighted to have Live Performance alumna Katischka Kiara as the Open Day guest speaker on the 2 October. Katishcka is currently making heads turn with her appearance as ‘Pauline’ in the internationally-recognised second season of 'Blood and Water' on...

END_OF_DOCUMENT_TOKEN_TO_BE_REPLACED

Netflix is the world’s leading streaming entertainment service, with over 209 million paid memberships in over 190 countries enjoying TV series, documentaries and feature films across a wide variety of genres and languages. Members can watch as much as they want,...

END_OF_DOCUMENT_TOKEN_TO_BE_REPLACED

Spring has sprung and AFDA alumna and singer Malehloka Hlalele, popularly known as Maleh, is back with a brand new Afro Pop album titled ‘Tones of the Queen’, which will be released in October 2021.  In this much anticipated offering, Maleh shares the different...

END_OF_DOCUMENT_TOKEN_TO_BE_REPLACED

AFDA is proud to announce that four AFDA 2020 graduation films have been selected in competition at the 10th annual Jozi Film Festival. The films include AFDA Cape Town honours films, “A Bloom”, directed by Antony Rangel Coll, “Four Walls and a Roof”, directed by...