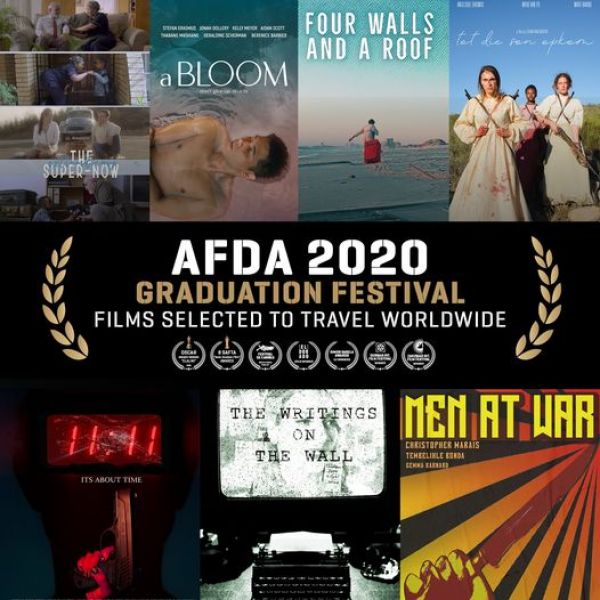 AFDA has selected twenty two 3rd year undergraduate and 4th year postgraduate  2020 Graduation productions from our Johannesburg, Cape Town, Port Elizabeth and Durban campuses to represent AFDA at film festivals around the world in 2021, on the national and international film festival circuit.

The annual AFDA Graduation Festival 2020, once again proved to be a huge success; screening over 80 undergraduate and postgraduate films, documentaries, animation films and tv pilots.

The examinations were conducted online in a first for AFDA and to their credit it went exceptionally well,” says film critic Stephen ‘Spling’ Aspeling. He went on to explain that, “the year was dominated by the Covid-19 pandemic, which affected many people, companies and institutions. Yet, this didn’t stop AFDA from embracing the challenge of producing films under difficult lockdown conditions. While this provided some context in terms of strict shooting conditions, students still managed to deliver. Just completing their films was an accomplishment but there were a few films that stood out from the rest. Understandably the themes revolved around psychological duress, spiritual soul-searching and tended towards escapism, when in the past movies have had a much more political slant.”

Previous AFDA graduation productions have been hugely successful both locally and abroad on the film festival circuit. These include the film ‘Elalini’ which won the Best Foreign Student Film Oscar in 2006, ’Kanye Kanye’ which won over 20 best short film awards worldwide, and was a finalist for the Oscars and Cannes in 2012. Additionally ‘Die Windpomp’ and ‘Hollywood in my Huis’ were AFDA student films which were later developed into feature films. AFDA student films have also won eight SAFTA’s in the “Best Student Film” category.

A huge congratulations to the cast and crew of all 22 films listed below.

AFDA DBN UG – I’d Like to Report a Suicide

AFDA DBN UG – The Writings on the Wall

AFDA Durban staff, students and alumni once again have a strong presence at the annual Simon Mabhunu Sabela film and television awards receiving 16 nominations in 12 different categories, with 8 in the acting categories and 6 for the horror feature film “Tokoloshe:...

END_OF_DOCUMENT_TOKEN_TO_BE_REPLACED

The Fleur du Cap awards which are in their 56th year, will this year, focus exclusively on the Most Promising Student category and AFDA Cape Town are pleased as punch to have 3 live performance students, Chad Langenhoven, Nikho Tsotsi and Thulani Nzonzo short listed...

END_OF_DOCUMENT_TOKEN_TO_BE_REPLACED

AFDA is proud to announce the launch of the AFDA Book, an online publication created by AFDA co-founder Garth Holmes and published by Art Africa Publishing. The publication takes us from where it all began in 1994, with 6 students armed with a broken TV and a rented...

END_OF_DOCUMENT_TOKEN_TO_BE_REPLACED

AFDA Johannesburg 2020 honours graduation film, “The Extraordinary Super-Now” has been nominated as a finalists in 7 categories at the Loerie Awards 2021, the most prestigious creative festival across Africa and the Middle East (AME). The finalists include: - Student...

END_OF_DOCUMENT_TOKEN_TO_BE_REPLACED

AFDA Cape Town is delighted to have Live Performance alumna Nancy Sekhokoane as the Open Day Guest Speaker on the 2 October. Nancy is a loving, passionate and trained performer, actor and voice over artist, among many other incredible things! She completed her...

END_OF_DOCUMENT_TOKEN_TO_BE_REPLACED

AFDA Johannesburg is delighted to have Motion Picture Medium Melissa Nayimuli as their Open Day Guest Speaker on the 2 October. Melissa is a creative who is passionate about storytelling, producing and the arts on a whole. Since graduating she has worked in the...

END_OF_DOCUMENT_TOKEN_TO_BE_REPLACED

AFDA Durban is delighted to have Live Performance alumna Katischka Kiara as the Open Day guest speaker on the 2 October. Katishcka is currently making heads turn with her appearance as ‘Pauline’ in the internationally-recognised second season of 'Blood and Water' on...

END_OF_DOCUMENT_TOKEN_TO_BE_REPLACED

Netflix is the world’s leading streaming entertainment service, with over 209 million paid memberships in over 190 countries enjoying TV series, documentaries and feature films across a wide variety of genres and languages. Members can watch as much as they want,...

END_OF_DOCUMENT_TOKEN_TO_BE_REPLACED

Spring has sprung and AFDA alumna and singer Malehloka Hlalele, popularly known as Maleh, is back with a brand new Afro Pop album titled ‘Tones of the Queen’, which will be released in October 2021.  In this much anticipated offering, Maleh shares the different...

END_OF_DOCUMENT_TOKEN_TO_BE_REPLACED

AFDA is proud to announce that four AFDA 2020 graduation films have been selected in competition at the 10th annual Jozi Film Festival. The films include AFDA Cape Town honours films, “A Bloom”, directed by Antony Rangel Coll, “Four Walls and a Roof”, directed by...