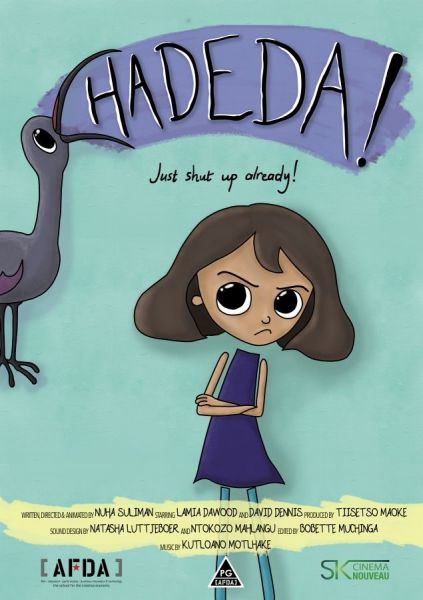 With the annual AFDA Graduation Festival around the corner it is great to see 2019 graduation festival films doing so well on the international film festival circuit. After been selected as a candidate to the Student Academy Awards and the CILECT PRIZE 2020 AFDA Johannesburg 2019 animation film, “Hadeda”, has been selected as a finalist at the Lagos International Festival of Animation (LIFANIMA) in Nigeria.

AFDA graduation productions have been hugely successful both locally and abroad. These include the film ‘Elalini’, which won the Best Foreign Student Film Oscar in 2006, ‘Kanye Kanye’ which won over 20 best short film awards worldwide, and was a finalist for the Oscars and Cannes in 2012. ‘Die Windpomp’ and “Hollywood in my Huis” which were initially student films and later developed into feature films.

LIFANIMA is one of the major animation festivals on the African continent, hosted in Lagos which is home to Nigeria’s NOLLYWOOD, the World’s 3rd largest film industry. It attracts the continent’s new generation of animators and visual effects talents and studios, as well as stakeholders in the film industry.

The submissions for the 4th edition of the Lagos International Festival of Animation received 905 entries from 100 countries.

The festival founder and director – Muyiwa Kayode stated that the quality of the submissions in the 4 different categories of 2D animation, 3D animation, Animation commercial and Visual Effects, saw a remarkable improvement compared with entries received in previous years.

“We are extremely excited at the rapid growth of LIFANIMA into what is today one of the top animation film festivals in Africa. We are even more excited at what this means for the African film industry. LIFANIMA is bringing African animators together and we are poised to see greater collaboration that will culminate in the successful production of proudly African animation features that tell the African story” says Muyiwa Kayode, who is also the creator and Executive Producer of the multiple award winning animation series – Turtle Taido.