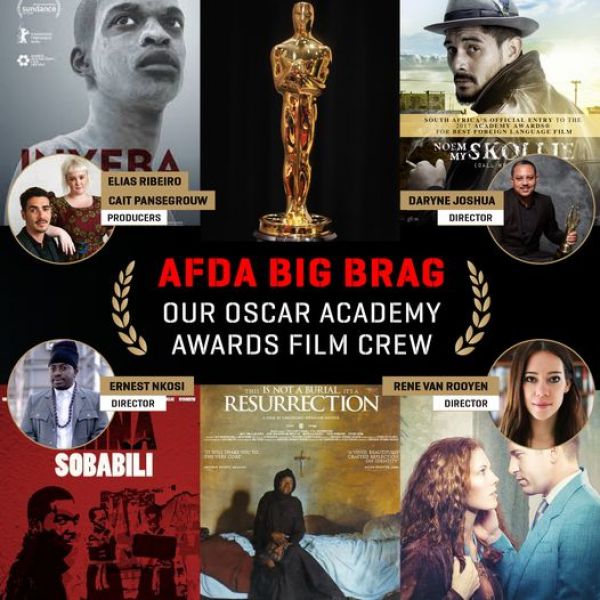 When, your goal as a tertiary institution is to:

Offer an education that contributes to South African nation building and rewards all stakeholders by providing a stimulating, rigorous and globally integrated learning experience that empowers students with the creative professional skills, enabling graduates to grow innovative and sustainable entertainment and media communication economies.

And, in one sentence you can confidently say:

In the last five years, five AFDA alumni feature films have been selected by South Africa and Lesotho as their Oscar candidates for the Academy Award for Best Foreign Language Film.

It is high time for us to shout out from the rooftops and blow our own trumpet.

In 2015, “Thina Sobabili: The Two of Us”, directed by AFDA alumnus Ernest Nkosi was selected as the South African candidate for the Oscars. The film screened at prominent film festival worldwide, winning the Audience Award  at the 2015 Pan African Film Festival and Jozi Film Festival. On the weekend of its theatrical release, it won the Silverback Best Feature Film at the Rwanda Film Festival  whilst ranking 8th as the only non-studio film in the top 10 at the South African box office. The film later won two awards at the SAFTAs 2016.

In 2016, “Noem My Skollie” (Call Me Thief), directed by AFDA alumnus Daryne Joshua was selected as the South African candidate for the Oscars. The film went on to win the Best Feature Film at the Zanzibar International Film Festival in 2017 and won five Golden Horn awards at the SAFTAs 2017.

In 2017, “Inxeba” (The Wound), produced by AFDA alumni Cait Pansegrouw and Elias Ribeiro was selected as the South African candidate for the Oscars where it was shortlisted in the last nine, narrowly missing out as a finalist. The film went on to practically take over the international film circuit winning 26 awards including the Grand Prize at the Taipei Film Festival 2017. At the SAFTAs 2018 the film scooped up six Golden Horn awards.