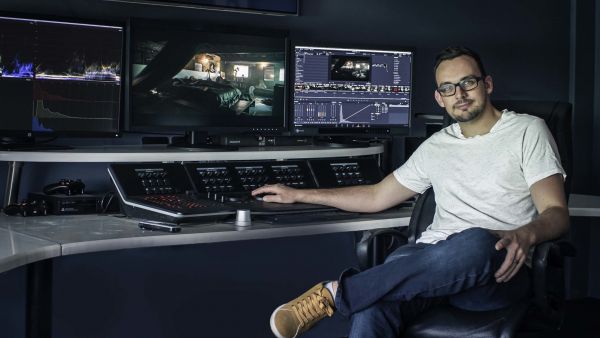 The Award is open to 27-year-olds and under, and recognises the top young creatives in the brand communications industry, with the winners each receiving a Gold Loerie.

“Nurturing young creative talent is a key mandate of the Loeries to ensure the advancement and longevity of creative excellence in our industry. Judging from the quality and calibre of entrants the future is extremely exciting,” says Loeries CEO Preetesh Sewraj

Jarryd is a graduate from AFDA, where he studied data and colour grading for film, cinema and video. In 2015 he won three AFDA awards for Best Colour and Data, Best Third Year Picture and the Audience Award for Best Picture.

Mentored by Keno Naidoo, Left Post Production’s senior flame artist, Jarryd says he is fortunate and honoured to have worked with top directors in the South African film industry such as Ross Garrett and fellow AFDA alumni Zee Ntuli.

“I strive to make every frame as beautiful as it can be. With the combination of grade and online I have been able to come up with stunning visuals and am proud to say there is only one other artist in South Africa able to do both online and grade at an industry professional level,” says Jarryd, who is thankful to his agency for their support and entrusting him with working on some high-end adverts.

When asked by Jessica Tennant from BizCommunity how he felt about being recognised as one of the top young creatives in the brand communications industry, Jarryd responded.

“I am truly honoured to even be considered for young creative, and gobsmacked to be one of the winners. It’s very strange to be in the spotlight coming from post production. Post production is normally in a dark aircon room, and normally the hero doesn’t take the credit, similar to Batman.”

“It’s been a childhood dream to be in the film industry and tell stories. So, while looking for what I wanted to become in the film industry, I found myself in a grading studio, where creativity and technology meet. I was naturally drawn to become a colourist and would stop at nothing until I was there.” says Jarryd.

The Loeries is the most prestigious creative festival across Africa and the Middle East. The awards were first held in 1978, as a mechanism to support and grow television advertising. Since then, the Loeries have become recognised as the most prestigious award in our region and have expanded to encompass all areas of brand communication including television, radio and print, communication design (including brand identity, architecture & interior design, package & publication design, motion graphic design), direct marketing, PR Communication, non-broadcast video, live events, sponsorship, digital communication and integrated campaigns.