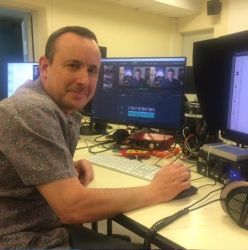 Mark was born in 1972 at Greys Hospital in Pietermaritzburg. Having studied film and drama at Wits he went on to work under the guidance and mentorship of Stash Couvaris at Video Lab in 1994 as a final mix sound engineer. It was at ZSE-TV that Mark spent many years gaining the technical knowledge of the TV industry and refining the art of mixing sound to picture. Mark has worked on endless TV productions like Egoli, 7de Laan, Sesame Street, Big Brother Africa, The Apprentice and hundreds of commercials. Having worked on features – like Discovery Channel’s An African Odyssey with Kingsley Holgate, and locally filmed international features such as The Ghost in the Darkness, n Saak van Geloof , n 100m LeeuLoop , Die Laaste Tango , Angel of the Skies, Die Ballade van Robbie DeWee and the 2013 Int Durban Film Festival award winning film Durban Poison, After all this it is now safe to say he has firmly cemented his position in the Film industry. Recently before joining the AFDA family, Mark was the Production Manager for Sesame Street. His Creativity, workflow strategies and technical knowledge produced results international quality from his teams for local broadcast.