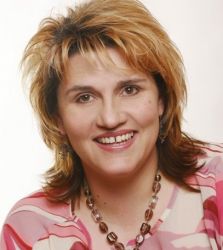 Heidi Edeling was born and bred in Bloemfontein where she started her training in classical music, playing the piano and violin from the age of 5. Soon afterwards, playing the guitar was second nature to her! She received training in Ballet, Modern- and Spanish Dancing, but decided to study Creative Arts: Jewellery Designing at Stellenbosch University! During her studies an opportunity arose to perform in an Afrikaans cabaret called 3-D, and after 5 years of choir singing (OFS Youth Choir and the Stellenbosch University Choir) it was to change her future drastically. In 1989 she sang in the PACOFS chorus for JOSEPH where she met pianist, Trevor Harper. They formed a successful liaison for two and a half years, building a repertoire of jazz, soul and contemporary pop music. During this time she worked for PACOFS as a Sound Engineer, but decided to move to Johannesburg and perform professionally as a singer-musician. She has performed in numerous shows, for example: THE CARPENTERS, UP AND COMING, SINBAD (a Janice Honeyman Panto), THE BUDDY HOLLY STORY, RETURN TO THE FORBIDDEN PLANET, SERIAL STOEPTANNIES, LIED VAN DIE BOEINGS, ALL THIS I KNOW (the songs of Brel and Piaf) as well as a very successful one-woman show directed by Sandra Prinsloo called PURE AS THE DRIVEN SLUSH. She has also performed at most of the festivals in SA, and has even directed shows like PERS for the KKNK in Oudtshoorn. Heidi is a sought after session singer, and has sang on many CD recordings of artists. She has done numerous live shows as a backing vocalist, amongst others SKOKIAAN for the SABC, and DIE CASPER RASPER SHOW 1, 2 and 3, for kykNET. She was the Lecturer in Singing for the Light Music Department of the Technikon Pretoria for 5 years, where she specialized in the performance of contemporary pop music. She has developed a singing course specially designed to benefit pop singers in the highly competitive market of today and presents these master classes twice a year. This course includes a business model, essential to any aspiring singer’s future. Currently, she works as a Music Arranger, Vocal Coach & Musical Director for several corporate functions per year, and has worked with the likes of Yvonne Chaka Chaka, Vicky Sampson, Johnny Clegg and Danny K, to Steve Hofmeyr, Laurika Rauch, Eden and various musical theatre stars like Craig Urbani, Joseph Clark, Kate Normington and Ian von Memerty. She has been the Vocal Coach for Musicals like I LOVE YOU, YOU’RE PERFECT, NOW CHANGE, AFRICAN FOOTPRINT, ANNIE and most recently has been Musical Director for 11 JANICE HONEYMAN PANTO’S ( i.e. : A LAD ‘N’ A LAMP (Aladdin); SLEEPING BEAUTY JACK AND THE BEANSTALK; CINDERELLA 2004; GOLDILOCKS AND THE THREE BEARS; ALADDIN 07 PETER PAN; SNOW WHITE; PINOCCHIO; ROBINSON CRUSOE & CINDERELLA 2011. Other MD work include: RETURN TO THE FORBIDDEN PLANET, BOYBAND, LET’S ROCK, THE ROCKY HORROR PICTURE SHOW, SCRIBBLE, KARLA EN DIE KERSKNOL, SNOOPY!!!, YESTERDAY ONCE MORE (The Carpenters), ROCK A TUTU (with the South African Ballet Company), HUISGENOOT 90 – DIE KONSERT A highlight of her career has been to work as the Vocal Coach and Repertoire Consultant for IDOLS SA, as well as being the Musical Director and Vocal Coach for the highly successful ZING 1 and ZING 2, kykNET’s competition for duo’s. She has been the convener and senior judge for the Huisgenoot Liedjieskryf-kompetisie for the last 4 years and enjoys discovering and developing new talent. Having also worked as an arts administator thoughout her 27-year career, Heidi expanded her business 5 years ago. She is the proud owner of MAIN STREET MANAGEMENT and currently produce new shows and corporate entertainement for venues/clients all across the country.