The new Showmax Original series DAM, shot, edited and starring AFDA alumni is a small-town psychological thriller deservedly receiving rave reviews.
Fortress of Solitude similarly calls DAM “South Africa’s answer to Sharp Objects and The Outsider.” Reviewer Sergio Pereira praises DAM’s “outstanding production quality… It rivals any international production, and actually looks better than most of the Netflix shows that dominate the Top 10 list,” adding, “More importantly, the cast delivers an equally exceptional performance to rival the production quality and script. They suck you into this small town’s drama, as you fall in love with some, pity others, and detest only a few… You’d be a fool to sleep on this eight-part mini-series. It’s simply a must-watch show that promises to fester in your mind long after the credits roll.”
“It is a wonderful and unique blend of our different South African cultures, using myths and legends of this land to create a psychological thriller,” says AFDA alumna and SAFTA winning actor Antoinette Louw, who plays the role of Dora in DAM.
Co-star, Pallance Dladla, gives high praise to the director of DAM Alex Yazbek (former AFDA lecturer) and to cinematographer and AFDA alumnus Tom Marais. “I love how Alex has directed this, and what Tom Marais, a three-time SAFTA winner has done with the language of the camera. Anyone who gets a chance to watch this outside the country will be amazed, and anyone in the country will be inspired – it’s about raising the bar. We should be proud of how far we have come in our industry.”
DAM, filmed on location in the Bedford and Adelaide towns of the Raymond Mhlaba Local Municipality of the Amathole District in the Eastern Cape, is perfectly edited by AFDA alumnae Miriam Arndt and Melissa Parry.
DAM is a Showmax Original made in partnership with the Eastern Cape Development Corporation, the Amathole District Municipality and Picture Tree. 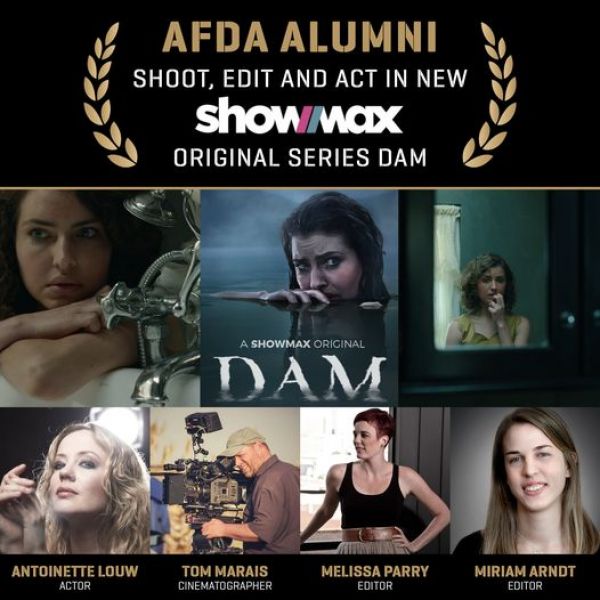