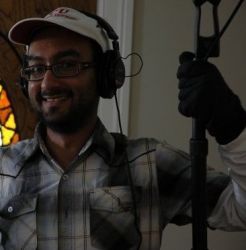 B.Soc.Sci (cum laude), LLB (cum laude), MFA Film and Television Screenwriting (California) “I was in grade 8 when my English teacher tasked her students to write an essay in which we described where we see ourselves in 10 years. My vision was certain: I would be working with the most powerful storyteller in the world at that time, Brad Bell, whose daytime drama series “The Bold and The Beautiful” was certified as the most watched half hour series. Although the odds were stacked against me for many reasons, I learned that dreams really can come true with hard work and when we appreciate the ‘small’ things we already have. Eleven years later, after passing the Attorney’s Admission Exams in Durban, I was on a plane heading for Hollywood, after being selected by the U.S. government as the top Fulbright Scholar from South Africa. There, I completed a Master’s degree in film and television writing, and studied the craft of screenwriting under Oscar and Emmy award winning professional filmmakers and acclaimed script doctors including David Ward, Alex Rose, John Carpenter, Phil Rosenthal, Tom Mankiewicz, Barbara Schock, William Friedkin, Michael Schiffer, Ron Friedman and Paul Gulino. I secured a competitive spot as an intern with CBS and “The Bold and The Beautiful” where I was mentored by Headwriter Brad Bell and the production team. I also worked as Script Development Assistant for a Hollywood film producer, honing my skills as a script reader and story analyst. I was also able to visit and present a lecture at the University of Southern California and at the historically important Lincoln University in Pennsylvania between 2007 – 2008. I’ve returned home to help build our screenwriting capacity as a teacher to those who want to learn. Upon my return, I was selected to join a panel of global experts in screenwriting who would develop and share skills through UNESCO. I believe in love to be the center of all things. I’m inspired by the work of Austrian psychiatrist and Holocaust survivor Viktor Frankl who wrote that when all our dignity and rights are stripped away from us, what remains is the last of the great human freedoms – the freedom to decide one’s attitude to the situation at hand. No one can take that away from you.”